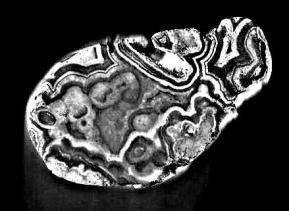 It’s taken millions of years to become the rock that it is.  This third rock from the sun we call Earth holds quadrillions of rocks.  They are like snowflakes and no two are ever exactly the same. They differ in shape, size, and color, and I obsessively want to pick them all.  At first glance, a rock from Catalina Island looks much the same as a rock from the fjords of Alaska, but to me their differences are worlds apart.

I have rocks in my garage, my basement, my glove compartment, my car console, my top dresser drawer, my jewelry box, in keepsake boxes, glued to a wooden cross, in suitcases, in coat pockets, in purses, on my bathroom shelf – even rocks in my makeup bag.  I pick up rocks incessantly.  When I return from a trip or vacation, in my luggage will be at least one native rock.  I love rock souvenirs because they’re free, they’re plentiful, and they don’t draw the attention of drug-sniffing customs dogs.  Not that I’ve ever had to worry about drug sniffing customs dogs, but you never know.

It all started at a young age. My father’s idea of a family outing involved rocks.  Sometimes it happened on a return trip from Grandma’s or more often, began as a random thought passing through my father’s head as he drove past the farm fields of central Minnesota with the entire family of seven packed into our rusty station wagon. I preferred sitting behind the front passenger seat where the rust had opened up a quarter-size hole in the floorboards.  I could see straight through to the road below, speeding under me in a blur of gray.  My mother sat dutifully in the front passenger seat, reading her book, while dad drove the station wagon, pointing out some interesting cloud formation, a deer in a cornfield, or something equally earth-shattering. Even now I can picture the back of my mother’s head as she sat in front of me, the kinky curls of her short, black hair and the slender curve of her neck.

My father would unexpectedly turn onto an unmarked gravel road, never telling us whether the destination would be historic, nostalgic, randomly interesting, or if we were going agate hunting. As soon as he put the car in park, we’d pour out like dogs being let out of the kennel.  Mom would make sure we were all wearing shoes and coats in cold weather, and in the summer, she would slather us in sunscreen until we were white with lotion.  She’d prop open her door to let the breeze through and casually go back to reading her book.

We, on the other hand, immediately assumed the positions of rock hunters.  The five of us spread out up and down the gravel road, resembling chicks following a hen.  We marched behind our dad, heads down, kicking at embedded rocks, reaching down to pick up anything interesting, then working up a gob of spit to launch at the rock in our hand so we could expose either the beauty or the blah hidden beneath the dust.

Dad was the master agate hunter. I was in awe of him for always being able to find an agate no matter where we were.  I was also secretly in awe of him for the way he could work up the most productive spitball, cleaning off an entire rock with one well-aimed wad of saliva. We’d hunt over a gravel road for most of the afternoon until the parked station wagon resembled a miniature toy car off in the distance. When someone started complaining too insistently or Mom started honking the horn, we’d head back to the car with our pockets bulging, our feet dusty and our throats dry.

Once we got home we started the process of polishing our rocks.  We had an honest to goodness electric rock polisher no bigger than the size of a shoebox. The polisher had

to run for two weeks straight and made noise like a never-ending hailstorm on a tin roof.  Mom insisted that it be put out in the garage, but we could hear it running all day and all night, scrubbing, smoothing and polishing our latest finds.  The final morning of the process was like Christmas for us.  The dirty, nondescript rocks of two weeks ago came out of the polisher warm and exotic looking.  We believed they looked just like the store-bought rocks, only better.

As I travelled more as an adult, I got into the habit of looking for interesting rocks wherever I found myself.  The rocks in the mountains of Colorado were, well, rocky. The plains of Tennessee were covered in shale-like slabs that chipped off in sharp rock slices.  The rocks on the southern coast of Mexico near San José del Cabo were worn smooth by the ocean.  Lake rocks in Minnesota were colorful and curvy.

I’m also fond of boulders.  Thankfully, I don’t have access to a skid loader, so I’m relegated to admiring them from afar and in place.  In many a farm pasture, huge boulders sit like sentinels in the center of flat meadows, deposited there so long ago, we forget how they got there.  I have rocks with round, bowl-like depressions in the center that could either have been Native American tools, or carved into the shape of a bowl beneath a millennial, perennial drip.  I’ve never found an arrowhead, which would certainly be my pièce de résistance, so I keep my head down and continue looking.

Rocks are eternal. They are matchless in their longevity and powerless in their movement.  They start out as any number of scientific minutiae and given a few millennia, become glorious rocks.  My love of rocks goes hand in hand with my love of nature.  Unhurried glaciers pick up and move huge rocks, ocean tides rearrange island rocks, and volcanoes violently eviscerate themselves of rocks.  Water becomes the sculptor that shapes my beloved rocks.  For years it takes the path of least resistance, running over, around or under rocks, taking its eternal time shaping them into the wonderful things they become. I like to imagine my assortment of rocks began in some young Neanderthal’s collection in the back of her dwelling cave, the prehistoric father grunting to get them out of the way, and the young female covering the small pile of stones protectively with her hairy hands.

I have beautiful rocks, ugly rocks,  jagged rocks, smooth rocks, peat rocks from Ireland, volcanic rocks from Hawaii, craggy rocks from Gloucester and red rocks from Australia.  I haven’t visited all these places but my Nana had.  I inherited these foreign rocks from Nana, who herself must have been a rock collector.  Nana labeled all her rocks with the location and date they were found.  I don’t catalog mine.  Yet, for some reason, I remember each one of them.  I know where they came from and why I picked them up, what I liked about them and what was happening in my life at the time of their discovery.  I have a first boyfriend rock, a graduation rock, a pregnancy rock, an “I love you” rock, a break up rock, an “I hate you” rock, a Jasmine rock and a burial rock.

Once sister MB said to me, “You must have rocks in your head.”

Super Daughter quickly responded with, “Wouldn’t surprise me.  She’s got them everywhere else.”

Anne Sinotte is a non-traditional student at Bemidji State University and currently lives in central Minnesota. She is completing her senior year after a twenty-year hiatus and is excited about finally achieving her goal of graduating from college. She comes from a large family that continues to provide her with the material for her stories. She has one grown daughter who is truly the greatest fun-haver of fun-havers everywhere.