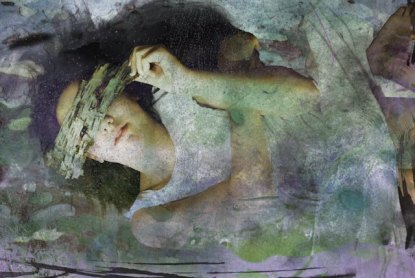 It was the summer we don’t talk about that we decided to dig the hole.

I don’t know how it started or who mentioned it first. The boy’s last mission in the Anderson yard ended in an embarrassing defeat when the tree they decided to build their house in refused to cooperate and forced them to give up their plan. Sheets of rotting plywood and tattered pieces of rope still hung in its branches, and the nails they pounded into its trunk rusted in defiance. At the base of the tree, shattered remains of a proposed window huddled in the black dirt, and a piece of glass sunk deep into my foot when I stepped too close.

In front of my brother and Doug, the Anderson boy, I merely laughed with surprise and valiantly walked home on the tips of my toes, blood tracing the lines down the arch of my foot. I only cried later when my father clumsily pulled it out with a tweezers, and I howled and squirmed like an animal because I wanted everyone to know how badly everything ached.  He told me not to go back to the Anderson’s backyard because it was full of broken things and leftover pieces that could hurt me. I had agreed, afraid of what was under the bandage on my heel, but in the morning another woman, sent by the church, dropped off a raw meatloaf we could make for dinner that night, and I couldn’t bear it at home.  I ventured back, cutting through the one yard that separated us to get there.

Doug handed us shovels the next day and showed us where to dig in his yard. At fourteen, he was two years older than my twin brother and I, and had already tasted a beer, so we simply nodded and followed his lead. The tree cover was so thick in the Anderson’s backyard that all of the grass had given up and died, and the piles of leaves always made it smell like fall was ending, even in July.

Doug took the shovel with the broken handle because I was a girl and he felt sorry for me or something. Deep down, I hated him because he looked at me like I was nearly an orphan, and seemed to

I couldn’t help but wonder what it would feel like to have cold, black dirt falling in on me.

hold his breath when I approached, fearing more bad news. Still, unlike the others, he offered us silence rather than condolences, showing us the litter of short-legged puppies his dog just had, or the toads his siblings kept in the shallow window-wells of his house. I returned the favor and never mentioned his older brother, who was in jail again for drugs and theft, and because there was nothing better for him to do since he dropped out of high school and couldn’t find a job. Before we started digging, Doug offered each of us a cigarette he had stolen from the glove compartment in his dad’s old truck, but we were both too afraid to take it.

It felt good to bite into the dirt with the metal teeth of our shovels, to throw the soil behind us as far as we could. It was a slow process and the muscles in our necks and backs were tight, but sometimes we forgot ourselves and laughed and talked about our neighbors like old women, dirt filling our shoes until it was dark and the streetlight turned on and we knew that we had to go home. Our dad had an old air horn that he kept next to his tool box in the garage and would impatiently press the button twice each night if we were not already back in time to take showers and get ready for bed. We promised Doug we’d be back right away in the morning, as soon as we had finished our cereal, but he just shrugged.

When I walked in our front door that night, I tried not to look at the flowers sitting on the kitchen table, and was thankful their green leaves hid the words on the cards signed by people I didn’t know.  Later, as I lay on my bottom bunk, listening as the breeze carried in the half-hearted song from the broken wind chime in the oak tree outside of my window, I couldn’t help but wonder what it would feel like to have cold, black dirt falling in on me.

Eventually the other neighbor kids heard about what we were doing and showed up to watch us dig. They dangled their legs in the hole and we felt power in revealing the milky roots of trees and plants to them, showing infinite mercy in retrieving worms and night crawlers from the hole and setting them off to the side. We dug down, down, down until our heads bobbed beneath the earth.

There was no plan. Each of us dug with a passion that we couldn’t explain to each other. Blisters blossomed in the gardens between our thumbs and index fingers, and we compared them each day, taking a break to make a gallon of Kool-Aid in their kitchen that always smelled like dirty dishes and dollar store potpourri. Doug’s parents got home and tried their best to ignore us, but occasionally they looked at my brother and me like we were sparrows that had fallen out of our nest. They just wanted to let nature take its course, but they didn’t want to see it happen.

Doug dipped his hand into the pitcher each afternoon to gently stir in the flavor with his wrists until it was ready to drink. We said nothing when he handed us Dixie cups full of the colored liquid, ignoring the rosy tint of his hands as we sipped politely and played with the puppies, naming them according to their spots. Once his parents turned up the television to tell us they didn’t want kids around anymore, we always returned to the backyard and climbed back down beneath the earth.

Doug, still desperate for a fort, said that when we were finished, we could pull an extra piece of plywood over the top and sit in the bottom of the hole and play

The Earth could decide at any moment that it was sick of us and swallow us up for good.

cards. My brother agreed, liking the idea of having a place to hang out where no one could see him, and willing to consent to anything Doug proposed because the older boy gave him a pocket knife for trimming thicker roots and let him keep it. It was so rusted that only one of the blades would even stand up straight, but it could cut and my brother looked at it with wide eyes and held it like it was sacred.

Still we dug, burrowing into the earth until we needed to drag a foldable chair into our pit in order to climb back out. I braided exposed roots and hummed songs I remembered from the radio, but always ended up with a shovel in my hand. Strangers who didn’t look at us came to pick puppies to take away. The animals would writhe and cry as they were carried out of the backyard, and we were sure they cried for us.  They wanted us and hated us for being kids too dumb to figure out what to do.

We sat in the bottom and took breaks, leaning against the cool sides and closing our eyes. It was an odd feeling, being so far below ground, like the Earth could decide at any moment that it was sick of us and swallow us up for good. We could whisper things to each other when we were there because we knew they would stay buried. Doug told us about when the police took his brother away and how he went downstairs and lit matches until he knew everyone was gone. We all nodded solemnly and didn’t comment. He just needed to feel the words escape him.

When it was my turn, I told them how at church camp that year I decided I didn’t believe in God, and how dying was probably just sleeping without dreams, but I stopped when my brother turned pale and dug his toes into the black dirt. I don’t remember what he said. I don’t think he told us anything. We all just rested our heads against the dirt wall until roots twisted into our hair and we envied the trees for standing so damn tall.

When it rained, it was over. Water filled the bottom and the sides started collapsing. For a while, Doug said we could leave it there. After all, it was the deepest hole any kid had ever dug in the history of the cul-de-sac. We very nearly cracked through the Earth and felt the moonlight from China.

Still, pulled by habit, we came back together days later and grabbed our shovels, our hands rough but remembering, and our nails still lined with dirt. Without saying anything, my brother dropped a red Hot Wheels car into the center, a mark to show that we had been there. Then, a shovel at a time, we filled it in, leaving our words to the roots.

Toni Judnitch is a triple major in creative and professional writing, English and philosophy at Bemidji State University.