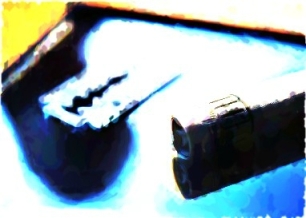 People thought it was weird that Renee and I often shared a bed during the summer. I never understood why. We were sisters, and it was fun talking to each other until the last possible second before we fell asleep.

As I stood in the middle of her room, sleepy, debating whether I could go back to bed, I remembered that I had to work at eleven. That was why I was up.

I slowly walked up the stairs while fully opening my eyes for the first time—only to have to shield my face with both hands as I passed through the living room and its giant sunbeams.

Sitting in the living room, I chugged some ice water and willed myself to get ready for work. It was a slow process that would eventually turn into a scramble. I knew it but didn’t care all that much. There were so many tasks that ran through my mind. All these things that I thought I should do, or all the things that I could do, ran back and forth like black figures through the fog. I held them for a few seconds, but couldn’t keep them in my sleepy grasp.

I could only remember the most important tasks I wanted to accomplish. I wanted to do some drugs. I was going to snort a Percocet and take a shot. That was my routine.

I laid my pill-crushing tools out on the table and went to work. Renee and I always crushed our pills on a hardcover book about Anne Frank. A while ago, we needed something to crush them on, so I grabbed Anne off my bookshelf and we had been using her ever since. She was like our friend. When we had pills, one of us would say to the other, “Go grab Anne.”

It wasn’t like we were intending disrespect toward anything. We just thought it was funny. It was funny that Anne was our little friend and that we snorted drugs off of her face. She provided a service, and we loved her for it.

I took my pill and broke it in half by pressing it against the middle of my palm. Then, laying the pieces carefully upon Anne, I covered them with a dollar and crushed them with the non-fiery end of a lighter. I then turned the lighter on its side and rolled it back and forth over the dollar, making sure to crush the pieces.

After forming the resulting powder into three separate lines using my credit card, I grabbed my toots and started railing the lines. Renee and I called whatever

Add in booze and weed, and it was a shindig at its finest.

we used to snort pills with our toots. I don’t know why. Usually, my toots was a cut down straw.

With at least one and a half pills snorted up my right nostril, I scurried out to my vehicle while spitting mouthwash onto the lawn. I had taken one shot to kick my pills up a notch. I just knew no one would pull me over, so I didn’t give a shit.

The sun was shining and making everything sparkly in the way that I knew meant it was too early to be awake. I was sitting in the driver’s seat with one leg outside of the car when my phone rang.

“Where are you?” Renee asked.

“Well, stop. Go pack a bottle, and grab my weed from the shelf,” she ordered slowly so I was sure to retain all of the information.

She was already at the Del Taco where we both worked. Fortunately, she was the manager that day and it didn’t really matter if I was a few minutes late, not to mention packing booze and weed. It paid to know people in high places.

It wasn’t a new thing. We drank at work before, but I couldn’t help but to be as excited as if we never had. As long as we didn’t get our asses kicked by a constant stream of customers, adding booze and weed to our workplace completed the basic recipe of a party. We had good people, annoying people, activities, and music. Add in booze and weed, and it was a shindig at its finest. Damn, I loved spontaneity.

Upon arriving, I slipped the bottle down a sleeve of the sweatshirt I was carrying. The end of the sleeve was safety-pinned so the bottle didn’t fall out. Then, I casually carried it through the escalating heat of the parking lot into the building’s central air.

I greeted everyone as I went to the back of the restaurant and stashed the bottle in the office behind the wall where the camera couldn’t see, and then headed next door into the crew-room where I put on a hairnet and hat.

Ben, Renee, Ally, and Jerry were working, and I liked all of them. Jean was also working. No one liked him because he wasn’t a good worker, and he was weird. He could barely do front counter, which was the easiest job there was, and he couldn’t seem to retain the ingredients of a taco, which was only made of three things: meat, lettuce, and cheese.

My first thought was to take a shot immediately while I could, so I did. With my back facing the outside of the office, I ducked my head just behind its wall and quickly chase-shot-chased. Then, careful not to wipe my mouth when I turned around (because you never can be too cautious), I met up with Renee behind the grill and slipped her weed and pipe into her pants pocket.

“Sunday funday,” she said to me, and I realized she was right. It was Sunday and we were at work, but fuck if that was going to ruin our good time.

“Sunday funday,” I agreed, and then I went to start cold prep.

Pauli Meinecke was born and raised in Minnesota. She will graduate from Bemidji State this spring with a BFA.