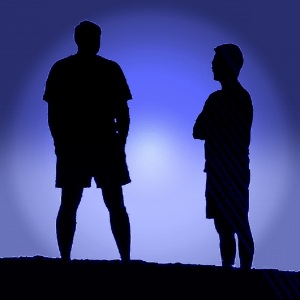 My brain drifted around in my head, floating in a pool of warm liquid. My entire body felt relaxed under the vodka’s influence. It was a struggle to get the drink down at first, but after a while, I think I started to enjoy the burn. Either that or the jungle juice from the party numbed me. I must have had sixteen shots of hard water after the first party. I must have. The stars were dancing above me as the grass crept around my bare arms, and I could feel the Earth flying through space and time. Karen’s face darted into my mind. I could almost touch her dark blond hair but my arm didn’t feel like moving. I remembered hearing her laughing at the party and seeing her bright smile as she had fun without me.

“Lightweight,” the brown-eyed, black-haired-head of Allen said from above me.

“Wha?” I couldn’t place what those words meant right away.

“Come on,” he said, reaching down to pull me to my feet.

I staggered up, and the Earth threatened to throw me off its back.

“I need to get you to your bed before you start making out with a tree or something,” Allen told me. He swung my arm over his shoulder and, thanks to his extra two inches, almost carried me across the grass towards the highway.

My mouth demanded water but I was in the mood for something stronger. As Allen did the work for both of us, I saw signs of a party off in the distance. I tried to steer us toward it, spilling off of Allen’s shoulders in the process. I wasn’t quite prepared to use my own legs.

“I think you’ve had enough for one night, Greg,” Allen pulled me back to his side and his sober focus kept us both going in the same direction.

“It’s technically not your birthday anymore.”

“Well, my phone says it’s Saturday, and your birthday was on Friday.”

“Your phone is a fuckwad.”

“I can tell,” Allen said. “And after a whopping three drinks.”

I stood up on my own. Allen stopped and looked at me a smirk on his face. “I had more than three,” I said, trying to remember.

“It was five,” Allen said. He grabbed my shoulder and steered me back toward campus.

I staggered forward, trying to understand the events between arriving at the party and now. I

remembered asking a few people if they would get me to the party and home. The party was half a mile away from campus, hosted by a few students sharing a house. It wasn’t too far, but I still would have liked a ride or at least a drinking buddy. Allen didn’t have a car but he was the only one to say yes. He suggested being designated walker. It was better than nothing, and he seemed eager to help.

“You know, this was fun,” I said. “I didn’t know what wonderful stuff happens to you.”

My steps were delicate, maybe with more control than normal. I felt like I was moving though water. I could see houses in the distance and headed toward them. Things had been fun but I wanted sleep.

“You sort of trailed off there. Were you going to say something after that?”

I thought for a minute and then said, “No.”

We kept walking, Allen making sure that I didn’t wonder into the street. We were next to a somewhat busy highway. Cars were driving by, illuminating our staggering path. After a bit, I realized I couldn’t see where Allen had gone; he must have been walking faster than I thought. He was probably back at campus already. I took off running toward the houses to catch up. It took a lot of concentration to go straight. I could hear him calling my name and knew I was getting close. Suddenly, I felt myself being tackled to the ground.

“What the hell do you think you’re doing?” Allen said, pulling me to my feet.

“Where did you come from?”

“I was right behind you. You just took off running.”

“I thought you had gone on ahead.”

“Come on, get up. Let’s just hurry up and get you home before you hurt yourself.”

The run seemed to have done me some good. My mind was clearer and I was able to pay attention to Allen’s guidance. He stood behind me after our sprint and kept me going forward.

We moved away from the road and were walking through the houses when I pulled out my phone and scrolled down to one name, Karen. I needed to text her or call her. To tell her I was sorry. I don’t even know why we broke up; she just said it wasn’t working out.

“What are you doing?” Allen saw the phone’s glow.

“Nothing,” I said. I started typing.

“Who are you texting?”

“I don’t want you texting Karen,” Allen said and snatched at my phone. “Give it to me. You’ve lost privileges.”

“Greg, you were practically begging to get someone to get you back after the party. Since that someone is me, from now until you are hung over, I am the boss of you. Give me the stupid phone.”

Since moving away from the highway and into residential housing, we took to walking in the middle of the street instead of on a sidewalk. It was easier for Allen to control me, I guess. I didn’t like it as much as the grass bits. If I fell here I could break something.

“We should get on the grass,” I said.

“No. The street is fine. No one is going to use the street for the next three hours at least.”

“Your booze powers will protect you. Did you see that article about that drunk guy that fell out of a four story building, twice, and just got bruised? You’ll be fine.”

Allen was usually right about this sort of stuff. I did feel like

I leapt up with the agility of a cat on anethesia.

the run woke me up a bit. I was more alert. I saw a shortcut back to the dorms and headed toward a fence. If I climbed it, I could make it back much quicker. I ran toward the fence and leapt up. I must have misjudged the distance because I wound up crashing into the wooden fence and sliding down. Allen caught up to me and I jumped again, using all my strength to hoist myself over before he had time to stop me.

“What the hell are you doing?” Allen hissed at me.

“Oh, for fuck sake,” Allen said. He seemed to realize my brilliance and climbed over, too. “You are going to get us caught.”

“You can just apologize for us.”

“I guess I’ll have to. If the cops get called, I’m bolting. I don’t care how well you can run right now.”

“You saw Karen at the party, didn’t you?” I said. I suddenly remembered that Allen had been talking to her for a bit.

“You were talking to her for a while, weren’t you?”

Allen seemed distracted. Maybe he didn’t like being in someone else’s yard.

“Well, did she say anything about me?”

“I don’t remember actually.” He hopped up with the ease of a monkey and flipped over the fence and out of the yard.

“You got in there just fine by yourself, why do you need my help?”

“Cuz—” I didn’t know what to say, so I leapt up with the agility of a cat on anesthesia. We heard a dog bark and I hurried to Allen.

“Ok,” I said and started pulling out my phone. “Sober Allen is a prick.” Maybe Karen was still at the party.

“Sober Allen is going to keep you alive and without regrets,” he said. He saw the phone in my hands and snatched it out of my grip. “What was the first rule I said?”

“She is not going to want to talk to you.”

“Because she broke up with you. What, you think that she’s going to want you back if you text her? Or will you woo her with your drunken lyrics?”

“I don’t know. I just want to talk.” I watched as Allen turned my phone off and put it in his pocket. “Did she tell you why we broke up?” I asked.

“Why not? Is that a Sober Allen rule?”

“No, it’s just we had other things to talk about.”

“Oh,” I said. I felt tired. My drunken powers were waning, and bed sounded great. “Let’s get back, I need sleep.”

We headed off back to campus. Allen acted as my lead. The stars were starting to disappear. I felt a bit more sober but tired. We got back to campus and were heading inside the dorms when something at the back of my mind said to stop.

“Allen,” I started. “Is Karen seeing someone?”

“I asked if Karen said if she was seeing someone.”

“She—well, she implied it,” Allen said, a bit sheepish.

“It’s been two weeks and she’s already met someone?”

Allen didn’t answer right away. “It seemed like she had been with someone for a while before you broke up.”

“What the fuck!” he yelled through his hand.

I wasn’t sure what I did.

Allen spit blood on the ground. I backed away a little. I wasn’t sure what to do.

“Oh my god, here,” Allen took my phone out of his pocket and turned it on. “Dial 911 or something. I think you broke my jaw. Christ, this hurts.”

I dialed it and put the phone to my ear. Maybe tomorrow I could say I didn’t remember anything. 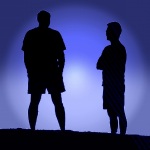 Peder Aalgaard graduated from Bemidji State University with a writing major and psychology minor. He got into writing due to cartoons and superhero comics, and developed a love for noir films. He’s lived in Minnesota for most of his life and doesn’t plan to leave soon.