Bite of the Needle 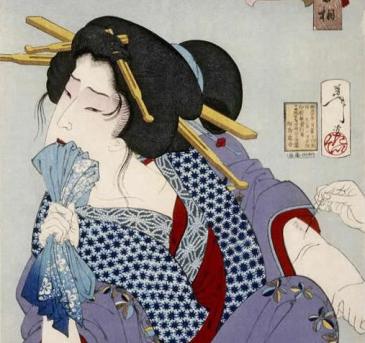 Color print from a woodblock by Tsukioka Yoshitoshi, 1888. This image is in the public domain in the U.S.

Ink drips down the sides of small containers, and plastic wraps a faux leather chair in a sterilized room.  I hear the snap of latex gloves and then feel the cold sensation of rubbing alcohol on my skin. The stencil is put in place and appears in a nice purple outline, the skeleton of what is yet to come. Now for my favorite part: the gun is turned on and the sweet buzz of the needle moving back and forth begins. I close my eyes in contentment, relaxing my body so that the sting of the needle isn’t so bad. A test line first, then he begins with a single needle outline.

I can feel him taking his time on each round and every corner, making the outline perfectly black. I glance back into the mirror, and between the smeared ink and the puffy skin, I can start to see a camera being formed. Line by line, it comes together and the purple skeleton turns to black. A quick switch of guns and he’s at it again, this time adding grays and whites into the mix, making the camera come to life and lift out of my back. With my skin red and inflamed, he is finished.

I turn around to see the reflection of a perfectly crafted Canon camera etched on the lower left side of my back, each detail delicately placed, the lens coming out at me, ready to snap a shot with the words Life Through The Lens inscribed beneath. It’s perfect. After saving up for almost a year it is finally done, my first tattoo.

Or at least the easy part was done. Now came the difficult task—telling my parents. They never approved of the idea of getting tattoos, though they themselves thought of getting some years ago. When I was in the ninth grade, my father said, “If I ever see a tattoo on you, I’ll get the cheese grater and take it off myself.” Little did he know that I had about five already planned out in my head.

He would be the last I’d tell about the new addition to my body. Being away at school made that easier; with an eight-hour drive between us, there wasn’t much risk of him seeing it until spring break. That gave me a good two months until I was at risk.

My mother was more understanding about the idea. It was only a month ‘til she saw it on Facebook, and she immediately texted me, “Nice ink, Heath.” Oops.

They eventually warmed up to the idea and got used to seeing my tattoo when I came home for summer that year. They weren’t, however, prepared for my next trip to the local shop in Madison, this time with my sister Paige. Again, I felt the sweet pain of the needle digging into my skin. This time I was a little more sensitive because the tattoo was on the thin flesh of my foot, and the artist had to use a harsh single needle throughout. The letters went from purple to black in no time, and resulted in a perfectly crafted tattoo that beautifully spelled out Schwester (the German word for sister) in gothic-style lettering. The tattoo artist wiped it down, and I could see the ink shining back up at me before it was covered to heal. Then it was Paige’s turn.

When she and I got home that afternoon, our parents were surprised to see black plastic wrapping our feet. They soon found out where we had gone and expressed how they hoped these were our last tattoos. Then they told us we would regret our  decision years down the road.

A year goes by, I move up to Bemidji and leave Middleton behind, and another season of school, work and summer begins. I start itching to add more art on my skin, this time behind the ear. The appointment is made, the money is saved up, and once again I step into a shop. The needle starts up and I’m at ease, ready for that familiar sting of the gun. This one goes much faster than the others, taking only about five minutes. I feel nothing but the vibration of the needle, almost disappointed not to feel that sweet pain from last time. Nonetheless I still feel the joy of gaining a new mark—three music notes placed neatly, feeding into my ear.

Not caring anymore what my parents think or approve of, the picture goes up immediately on Facebook, showing off the new ink. I get a full day before my mother comments, “You need to stop already. Trust me, you’ll thank me in about fifteen years.”

It hurts a little to know that she doesn’t like the things that make me happy, but I know this is the way I stand out from the unit that is my family. My tattoos comfort and calm me, much to the horror of my mother. With each new mark, my parents are reminded that I have my own independence.

Tattoos are different for everyone. They say you get a tattoo when you go through a major change in your life, which I guess is right. I was in my first year of college when I decided to get my first one.  My sister was newly engaged when we got our matching ones.  And the third, well that was more of an internal change rather than an active life change.

And that’s just the thing: we all get inked for our own reasons, some more meaningful than others, but all important. Whether it’s for a lost loved one or because you like seahorses, a tattoo both defines who you are and becomes a part of you. Everyone has that defining moment when they declare their independence and tell people who they are, and no one person does it the same way as anyone else. Independence is shown in different ways and at different times in life. It’s continuous. Our improvements as people won’t end. I will continue adding this art to my body until I see fit to stop, and I can’t wait.

Heather Wehling is a 20-year-old junior at Bemidji State University and is studying English with an emphasis in writing. Last winter she interned for the online music magazine Postal Music Mag, which published about ten of her pieces.

Categories: Ink
No comments yet…