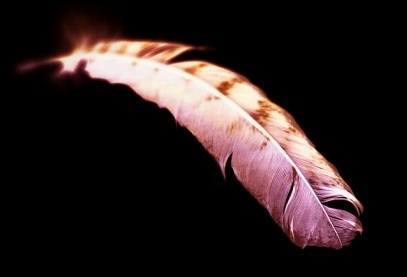 When I was nine years old, my mother and I decided to attend a fairly large church in Missouri, where people believed in possession, speaking in tongues, and falling under the Spirit.

The broad, white building always seemed to look dirty, and despite the high ceilings and wide walls, the room still felt cramped.  The pastor was a short man with a thick, black mustache, receding hair line, and puffed cheeks.  Every Sunday morning he would call forth everyone who wanted to be healed, be saved, or just feel the presence of the Lord.

Anybody who wanted to participate would gather at the front of the church and stand in a crowded semicircle.  Each person would have hands laid on them by the pastor and elders of the church and be prayed for, and after a brief moment, the person being prayed for would suddenly fall backwards and lie there for a while.  As I was only nine years old I was fascinated by this.  My mother and I had attended several types of churches but had never been to one like this before.

Wide-eyed with interest, I would sit on the edge of my white folding chair, stretching my neck to see around those in front of me and watching in amazement at the thirty or so people falling like dominoes as the pastor laid hands on them.

I didn’t fully understand what was happening.  It only slightly occurred to me that it should have been strange that everybody who had “fallen under the Spirit” would also get up around the same time, as if the Spirit had performed mass hypnosis and then snapped its fingers for everyone.  I thought that it might happen to me outside of church and wondered what would happen if somebody fell under the Spirit and nobody was there to catch them.  I also wondered what happened to them as they were lying there—did these people dream about singing angels and the airy light of heaven, or was this like a Spirit-induced coma, quiet and void?  I also wondered how they felt afterward.  I thought for sure they would be embarrassed for having lost control of themselves.

The time came when I got to experience what occurred first-hand, have all of my questions answered, and lay my imagination to rest.

It was a hot Sunday morning.  The central air was set too low, and the slowly spinning ceiling fans were far too high on the vaulted ceiling to really make a difference.  The air in the room seemed to be sucked out by all the people dressed in their Sunday best,

I could see age-weathered hands laid flat on my body, feel their slight pushes against my body that wouldn’t give way.

and replaced with cloying mixes of perfume and body odor.  Babies and small children wailed with hunger and boredom, competing with the sounds of recited prayers and the sermon preached.

Finally, the moment came when the invitation was extended and members of the congregation were called to the front of the church.  My mother decided that I would go up there as well.  I didn’t want to go.  A nervous child by nature, my heart began racing and my stomach churned.  We argued for a moment, with her pushing to go to the front of the church and me declining and looking around as if somebody might hear her, take her side, and drag me up there.

As the body count up front grew higher, my mother grew madder until finally I gave in.  Reluctantly I trudged forth in my tight Mary Jane shoes and champagne-colored dress I wore for Easter the year before.  I stood at the end of the room, as far from the semicircle as possible.  I was afraid of what might happen if I went through with whatever this was, but I was more afraid of how my mother would react if I didn’t.

The pastor stood in front of me and an elderly gentleman, an outstanding member of the clergy, stood behind me, expecting me to drop at any moment.  The pastor prayed and prayed, but try as he might, I just wouldn’t fall down.  I closed my eyes and my mind raced, wondering why God or the Holy Ghost, or whoever it was, kept me standing.  Another man came to lay hands on me, probably trying to help the pastor pray the Spirit into me.  Then another man came, and another.  I could tell by how many hands were laid on me, but it helped that I was peeking.

I could see age-weathered hands laid flat on my body, feel their slight pushes against my body that wouldn’t give way.  I could smell the mix of coffee and peppermint emanating from someone’s mouth.

Knowing my mother would be very upset if I didn’t perform well, and concerned that I might hurt feelings if I didn’t react the way others had, I gave in and basically played Trust with the clergymen.  I lay down and played dead with the belief that if they so much as saw me breathing, I would have been exposed as a fraud and they would get really mad, or worse, try again.  I ended up taking a short nap and when I woke up, I found that everyone else had already gotten up a long while before I had.

After church, we packed into our small white two-door car.  On the way home I watched clouds of dirt forming outside my passenger window.  My mother broke the silence and asked, “How do you feel now?”

I was disappointed that nothing special had happened, confused as to why so many people did this each week, and relieved that it was over.  Still, I thought about her question for a while before I answered.

We followed the road home, and shortly after decided to try something new for worship.  We never returned to that church.  I always felt as though I fell short of expectation—I had no tales of sensing anything divine—and yet the experience fell short of mine.

Amber Gordon is a student at Bemidji State University, pursuing a BA in humanities, a BFA in creative and professional writing, and an electronic writing minor. A brooding romantic, she enjoys writing poetry, short fiction, and the truth.