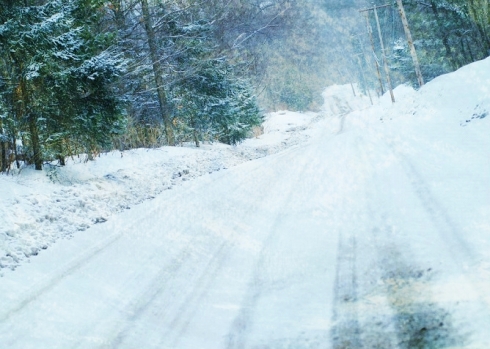 Jon wakes up the same way every day in the winter.  The ring of the dreaded phone tells him it is time to be on the move for the day.  He faces each day the same, with the grit and tenacity of a wolverine.

Jon doesn’t tend to smile, saying that it is useless to show happiness when there is so little in this world.  He jabs at the handle of his truck with a claw-shaped hand until the door opens or his hand starts bleeding bad enough for him to switch arms.  The truck is always in shambles, looking like a scene out of the Battle of Midway.  Jon throws clothes, gloves, and whatever else he can jam into the cab out of the way so he can assume his usual spot.

Every winter day is the same as he jerks the truck out of his driveway to take the simple two-mile ride down to the aluminum can he calls “the shop.” Snow tires groan under the weight of the sand and salt from the endless hours of the week’s plowing.  He has been pushing snow with the same Chevy 3500 he’s had for ten years, same plow and frame since the date of purchase.  No change in his equipment, other than the hundreds of pounds of reinforcing steel that he welded on to fix problems.  Jon doesn’t enjoy change, saying that it means that you have done something wrong and need to fix it.  Change has never been good to him.  It is something that should be avoided if it can be.

As he pulls into the shop, he observes the day’s mission.  The first words out of his mouth every day are the same.

Matty always sits there and stares blankly as he watches Jon.  The next move is always to the coffee maker that is hidden behind years of grit, grime, and the occasional wrench on the workbench.  Black coffee fills the room with the smell of its dark Columbian roast.

Filled with coffee, Jon is ready to tackle whatever he believes the Lord has in store for him.  Many hours of the day are tied up with his plowing operation.  With four trucks plowing state roads and 150 driveway accounts, his days are spent keeping his vehicles as happy as the people he services.

He forges on to push through his day; multiple layers line his body to deal with the constant cold endured in a truck with no heat.  Every morning, Jon says that tomorrow will be the day he fixes the heat, but, as usual, tomorrow never comes in his mind.  He lives cherishing the present, never once taking a chance to reflect on the past or gaze into the future.  He just chugs his way down the road, finishing his daily route.  His predictability is almost that of a mailman following the same route for thirty years.

As a boy he delivered the papers up and down Oakland Street.  For thirteen years he rode along the same route, until he turned eighteen.  Rain, sleet, or snow, he was better than any mailman the city of Amesbury ever had.  He could ride his Univega up Oakland Street to High Street and back down Oak Street, delivering to two hundred houses on eight miles of road, all before the 7 a.m. bus to school.  He was at the same house every day, at the same time, never more than a few minutes apart.  His customers would meet him at the street day-in and day-out to take the paper out of his hand.

Sunday brought with it the challenge of delivering papers and making it to the church on time.  People got upset when the altar boy walked into Mass a few minutes late.  Jon worried about that every Sunday; he never wanted to upset the Father.  The Father counted on him every week, and head altar boy was an important position to Jon.  He never took it lightly.  He was honored to wear the glistening robes that all the number-one boys had worn before him.

Sunday is Jon’s favorite day.  Sunday is the day he lives.  Sunday brings with it the hymns and melodies sung throughout the church as he sits in the front row. Surrounded  by suits and dresses, Jon sits there in his boots, jeans, and flannel, black from the weight of his week of work.  He sticks out like a sore thumb in a room of the average Joes.  Every move he makes is charted out and decisive.  When the baskets are passed around for collection, he rattles through his pockets for quarters.  Everyone knows who creates the clanging in the basket, but no one ever says “boo” to him.  He is perched up throughout the service, hanging onto every word that the priest has to say.  Today’s sermon is all about how we need people in our lives to keep us grounded and happy.

When it is time to receive the Eucharist, he makes his way to the front, making sure he is one of the last to collect his prize of the day.   The wine is never an option for him.  Under this roof, alcohol is the last thing on his mind.  If there is Eucharist left, Jon makes his way up to the front, always making sure to receive his from the priest, and casually strolls out the back of the church.  He never stays for the last few minutes of Mass; he has little interest in whatever is going on in the church this week.  If he tried to show interest in it, he would have to change and Jon doesn’t want to go through that struggle.  Change is trouble, and that will never change for Jon.

Taylor Cyr is a homegrown New Englander who spends most of his time on or around the golf course.  Raised in small towns, he enjoys the simple things in life.  Other passions include fishing and ice hockey.