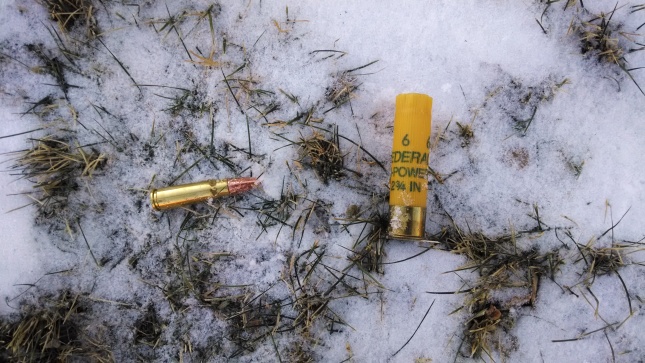 I can field dress. I can haul bodies through the swamp by bony-fingered antlers. I can butcher, cleaving flesh from bone and wrapping it for the freezer. I can spray blood and hair from a truck bed with icy hose water.

But kill? The thought used to make my stomach roll, even for things that don’t bleed and scream and thrash as they die.

Once, way before I was old enough to hold a gun, we visited my father at Eight Mile. Not the Detroit version—no, this was a dusty logging site north of Squaw Lake, Minnesota. He was thinning a white pine plantation there, eight miles down a rutted, overgrown access road. (Not all of our sales’ names are so self-explanatory; in fact, a lot of them skirt the boundaries of weird. Big O, Nosey, Button Box, Happy Hollow, Missy, Sippy, Anvil … but not the Cursed Forty, where we went two weeks straight with a breakdown every. damn. day. That one was pretty unambiguous.) Eight Mile, by my estimation, was one of the tamer monikers.

Through the rolled-down window of my mother’s Jeep, I heard the pulsing roar of Dad’s Husky pro saw and witnessed steel teeth gnashing bark. Teary-eyed, snot flowing freely, I stuck my head out the window and begged, “Daddy, stop! You’re killing all the trees!” I did not understand cycles or regeneration. I only knew of death, of grandparents and friends that grew ill and never recovered. I only knew that once lost, life did not return, and at seven years old I found killing—for any reason—deplorable.

It’s mid-afternoon on a cloudy Saturday, and guns clutter the dining room table. A 30-30 Winchester, 12-gauge and 20-gauge shotguns, Chinese SKS with a five-round magazine. Long barrels and solid, wooden stocks. I lug ammo down from the upstairs loft, too, at my brother’s urging. The small cardboard boxes are surprisingly heavy, and they issue muted but satisfying thumps when I stack them on the table.

In the mudroom, we dress for low-forties weather and a light breeze, tugging on Caterpillar work boots and mid-weight jackets. The orange stocking cap comes last, and it clings tight over my ears.

Then it’s back to the dining room, where I collect the pump-action 20-gauge and a handful of fat yellow shells to stuff in my coat pocket. The gun is heavier than I remember from previous autumns, from clay pigeon shooting and a Life Sports trip to the local shooting range. Its camouflage strap pulls taut across my chest like an over-tight seat-belt, bunching my collar and biting the junction where neck meets shoulder.

Dad and my brother Cody shoulder their own guns and pocket their ammo. We tramp outside and cross the yard in silence. Two of the shop-and-barn cats—Furstein and Spaz, calico and tabby respectively—twine around our calves, impeding progress like it’s their job. They prowl with triangular ears pricked, scenting the ground in the predatory manner that’s never been tamed out of them. Their little paws motor over shaggy grass and stray, curling oak leaves.

“Mrow,” Furstein says, staring up at me with luminous green eyes. Her long, silky fur is patched with black, orange, and cream like a prettier version of Frankenstein.

I’m careful to keep the muzzle angled away from everyone, cats included, even as we clamber through the wire fencing at the edge of the pasture and my jacket snags on a barb. The safety’s engaged, but every gun is loaded, my mind whispers, even when it’s not. Never, ever assume. Everette drove that home for us—for me, my brother, everyone at our high school.

A sophomore to my seventh-grader, he was sixteen and tall. I mean actual 6’2” tall, not just from the vantage of a twelve-year-old girl. I never knew him well, but we all walked by the memorial taped to his locker come October 9 of that first fall at Deer River High, and it was a daily reminder that he was someone loved, someone missed, someone gone too soon.

This type of loss doesn’t truly take form until it happens to somebody you know, until you hear, “They thought it wasn’t loaded” or “It was an accident.” That’s when you realize accidents aren’t reserved just for the inexperienced or the reckless. Sometimes it happens in the stand; sometimes it happens to Dick Cheney; sometimes it happens to 6’2” teenagers in a bedroom at home, horsing around with a friend and thinking it’s fine; it’s not loaded. After that friend pulled the rifle’s trigger and realized no, it is, Everette didn’t die right away. He hung on all the way to the hospital—through the ten minute ambulance ride into town, through darkened Saturday streets just after midnight, through hysteria and flaring blue-red lights—but he never saw morning.

We trek up and over the rice paddy wall, into the browning field beyond: centerpiece of our Back Forty, of the fenced acres where we hunt, ride, and saw down Christmas trees.

I’ve shot clay pigeons back here before, but today is different. Today is a stationary paper target. Three of them hang on an old hay bale in the middle of the field, evenly spaced and white with concentric rings stark against swaying saw grass.

We line up about thirty yards out and face our respective targets—in my case, the middle one. I load my shells first, and then I fix my stance: left boot forward, feet split by shoulders’ width, weight primarily on the front leg. I hold the stock firm against my shoulder to minimize kick and, leveling the gun at my target, stare down the scope.

“Both eyes open!” Dad reminds me as I seek out that tiny, red dot. I force my left eyelid to rise, and then I lift the muzzle minutely, settling the dot directly over the bull’s-eye. I don’t adjust northward, but I know it’d be necessary for a longer shot, owing to a drop in bullet trajectory over distance. A lot of deer have crashed off scot-free, white tails raised, because buck fever whispered, “Shoot,” without a pause to judge distance.

I flick the safety off with my forefinger, and then I squeeze the trigger slow and steady.

Crack. Echoing, resounding on the air. The stock thumps back against my shoulder, a fleeting burst of discomfort that fades quickly in the face of adrenaline.

Two other shots mirror me, one on each side, fit to rattle eardrums.

I pump the action, ejecting a hot shell that spins off into the grass. The ground will be littered with them soon. At the end, as the sun’s sulking off into dusk, we’ll go around with a plastic bag and collect all the spent ammunition, all the blackened shotgun shells and rifle casings that will make our fingers stink of gunpowder and anticipation.

I chamber a second round and fire again, following each step with methodic care. Again, again, again. Our noise echoes back from the trees. Smoke drifts strong and acrid on the air, mingling with the crisp chill of northland autumn. It reminds me of the haze left by fireworks.

“Best shooting wins the last piece of cake,” Dad wagers as we lay down our guns and walk, three abreast, to inspect the targets. I taste the phantom sugar of German chocolate icing, but it passes quickly upon reaching our destination.

My shots pepper a few inch radius. Not the work of a marksman, but not abysmal either. One even flirts with the bull’s-eye’s northern curve.

“Not bad,” Cody says. A high compliment, coming from him. His own shots have punched bigger, more ragged holes, courtesy of the 12-gauge shotgun he favors. They hug the center more tightly than mine, too, but that’s to be expected. He’s been hunting since he was small enough for the recoil to knock him off his seat. (And it did, once. The backwards-off-the-cooler story still gets dredged up at Thanksgiving dinners when the guys get to reminiscing.) His target looks good, but so does Dad’s. They declare a sudden-death round to determine a winner.

I’m not in the running, but I still take a moment to feel good about my shots, to think soon. And as we walk back to our guns, boots shushing through the tall, yellowing grass, I feel a stirring in my blood: primal, predatory, ready.

I cried when both my horses died. I cried when my cocker spaniel, Slater, died too, and when Cody and I found our crotchety, tuxedo tomcat—the one that used to sprawl and sun-bask on the front porch—pancaked on the road. I’m sure I’ll cry for Furstein and Spaz when their times come, too. All of them feel solid and tangible to me, with distinct personalities, quirks, niche-holds in my reality. Dissociation and detachment doesn’t work when I think of them, not like with obituaries, news captions, or other peoples’ pets. They’re mine.

Everette is, too, in a sense. A space carved in the cortex for him; an empty locker with its scratched, red paint; weeks of puffy-eyed teenagers and teachers offering free passes to the counselor’s office; a little whispered reminder as I heft the 20-gauge—always loaded.

Questions plague me hours after sunset, as I’m standing at the bathroom counter, rinsing the smell of gunpowder from my hands. I scrub at the creases in my palms, the life lines and heart lines and fate lines. Will I have blood on them soon?

I wonder if I can do it. If I can watch something die, and not feel it wrenching at me like a claw-hammer inside the gut. If it will feel the same as with the horses, or Slater, or the tomcat, or Everette. Or can I pull the trigger, smile, and shuffle Bambi’s kin into the same emotional box as a beef cow or a salmon gasping its last in an overcrowded net? Can I fall into that cushy, padded headspace of it’s not real until it happens to someone you know? Should I even want to?

Nikki Mentges is a creative and professional writing major from Deer River, Minnesota.